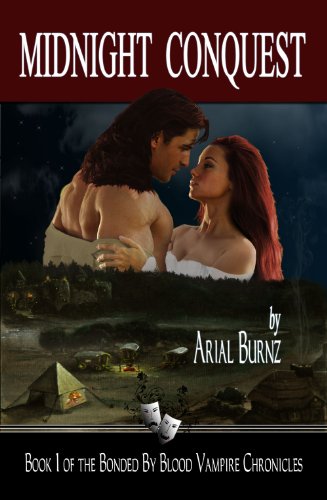 This is the first in Burnz’s Bonded By Blood Vampire Chronicles series. Vampires, a long time blood feud, gypsies, two surprising revelations, two romances and a prophecy grace the pages of this paranormal romance. Set in 16th century Scotland, Burnz does a good job of letting the history act as a background, not another character in the story. It is there for flavor and not to take over the story. So no, this is not a historical romance.

Broderick began his Vamsyrian immortal life as a Blood Slave. Betrayed by his wife to his enemy, he was turned by the same enemy at his request so he would be able to continue to seek revenge against his enemy. He soon thereafter joins and travels with a Gypsy caravan reading fortunes.

Davina, stuck in a marriage where she is frequently beaten, had met Broderick when she was 13 and has loved him since. Her husband is now dead, killed in battle as were her father, brother and father-in-law. Her child thrives in the absence of its father. But Ian’s body was never found and Davina has nightmares that he comes back.

Nine years have passed since that Gypsy caravan and Broderick have been to town. Broderick dreams of a grown up Davina, awakening him from his day sleep with the first dream he’s had since being turned 30 yrs before. Davina has been waiting and hoping Broderick will return. She used the memory of him as her strength to get through the loveless, cruel marriage.

This is a good story which I enjoyed. I think paranormal romance and vampire fans will as well.

It has a sneak peak at the upcoming second book in the series,Midnight Captive.

Warning Spoiler Alert!!!
This has not one, but two HEA endings.

This site uses Akismet to reduce spam. Learn how your comment data is processed.